Let’s find answers to these queries on top blockchain trends through this blog:

In a world of new and emerging technologies, blockchain has successfully made its mark in multiple sectors and many people look for top blockchain trends nowadays. It is essentially a series of an immutable record of data and is time-stamped. In a blockchain, these records are managed by a cluster of computers that do not belong to just one person. Every single block in the blockchain is secured and uses cryptographic principles. 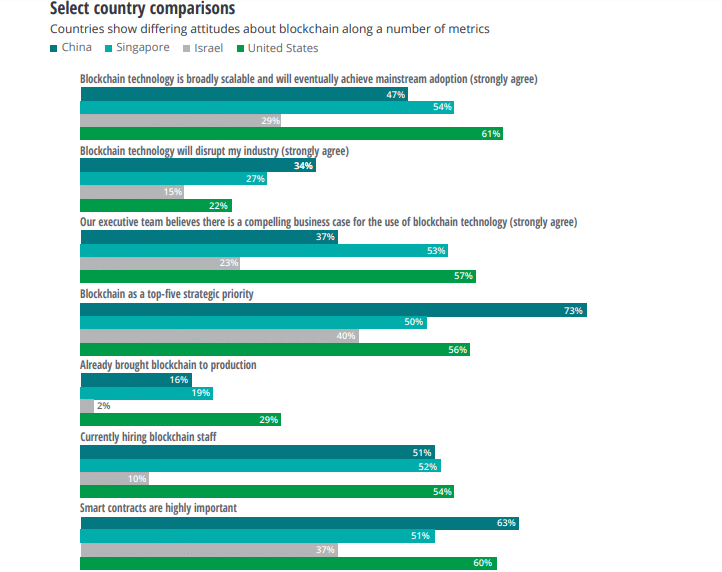 Today, this revolutionary technology has been adopted in various sectors across the globe. Be it Banking and Finance or Healthcare, blockchain technology is gradually taking over the markets around the world. Recently, the technology was also used to conduct elections in order to identify, secure records and to track votes. As per reports, blockchain technology was tested in a limited capacity during elections in Sierra Leone in 2018 and showed results close to those from official tallies.

Blockchain technology has been around for a decade. In the year 2019, we are witnessing the fifth generation of blockchain, i.e Blockchain 5.0. The Blockchain 5.0 majorly supports faster transactions while effectively organizing communication channels. With so much happening in the blockchain space, it is very evident that the technology is all set to surprise the world with its caliber. 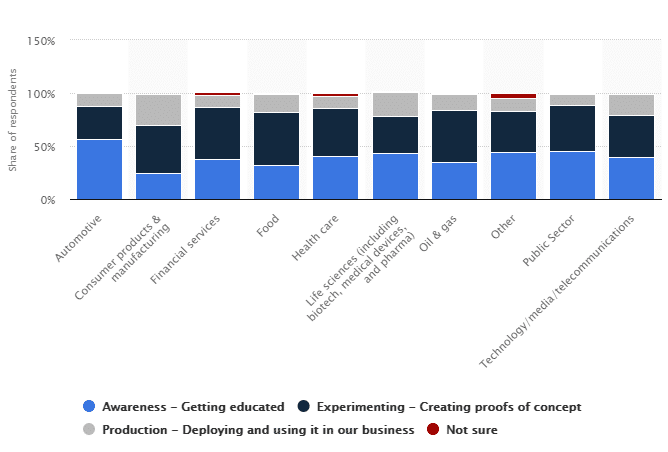 Statista – Blockchain adoption phases in organizations worldwide as of April 2018, by industry

Now have a look at top Blockchain trends for the year 2020:

Dubai launched the first-ever state-backed cryptocurrency in the year 2017 called ‘Emcash.’ These Emcash tokens essentially has its own native blockchain that it uses to function and it can be used for various services, regardless of whether it is a government service or not. Dubai is all set to become the world’s first blockchain-powered government by 2020

At present, most of the governments across the globe have to deal with large quantities of data. It has been tried and tested that the adoption of the blockchain technology will help governments manage data effectively while successfully improving multiple government sector functions.

This property of blockchain itself indicates that the Amalgamation of Blockchain with Governments will become unavoidable in the year 2020. As of now, Estonia has successfully implemented blockchain technology at the government level which essentially includes 2-factor authentication and enables people to control and secure their own data.

Blockchain has the potential of providing amplified accuracy and information-sharing in the world of finance for everyone across the globe. According to reports, (UBS Swiss bank) and Barclays Bank (UK) is actively experimenting with blockchain technology in order to accelerate the functions and settlements of the back office. According to many people, the adoption of blockchain technology for this can potentially reduce costs up to $20 billion.

Recently, ReiseBank AG (Germany) successfully completed instant payment between clients using blockchain technology (cross border transactions) in around 20 seconds. As per reports by PWC, by 2020, 77 % of financial institutes are expected to adopt blockchain technology as part of an in-production process.

Artificial Intelligence and Blockchain technology are two of the most eminent technologies in today’s era. By bringing the two together, Blockchain will witness a number of improvements and a fleet of new applications.

According to IDC (International Data Corporation), by the year 2020, 51% of businesses will be making the transition to AI with blockchain integration.

Finalze is a software platform which is amalgamating blockchain with Artificial Intelligence in order to fasten and smoothen civil infrastructures. Essentially, the company works towards automating the entire construction industry while meeting required safety regulations. 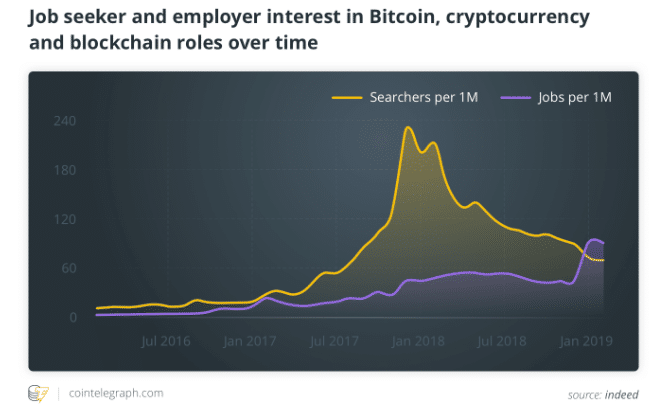 As we know, blockchain is a new and emerging technology with a very small ecosystem and workforce. With time, blockchain is witnessing quick growth and its integration with various sectors is creating a lot of new opportunities for blockchain experts and enthusiasts. The rapid growth of blockchain technology is eventually leading to high demands of acquiring human resources, in other words, to hire blockchain developers.

Blockchain technology is honestly bringing in a much-needed revolution. IBM and the government of Dubai are collectively working towards delivering smart contracts with the intention of optimizing traffic in maritime goods flowing through the emirate’s port.

Also, By 2020, Financial institutions of Dubai are planning to transfer all their transactions to blockchain!

Moreover, as per the prediction of various blockchain experts and enthusiasts, the year 2020 will officially witness blockchain-based property lease contracts with the help of smart contracts. Blockchain enables safe, fast and cost-effective methods of selling a property.

One of the blockchain trends 2020 suggests that blockchain will enable content distribution which will eventually allow artists to earn royalties on their music without actually having to commit to a confined label.

As per top blockchain trends, The SCM industry (Supply Chain Management) has a lot in store for the year 2020. We all understand that supply chain management is a tedious process. Blockchain technology has the power to simplify the entire process while eliminating any kind of obstacles and issues.

Blockchain trend 8: Blockchain as a part of the IoT

Talking about the best trends in blockchain, it is absolutely imperative to mention that blockchain is a part of the internet of things. Internet of Things is one of the most talked-about technologies of this era! Today, we find a lot of devices and smart homes connected to IoT. These smart devices and smart homes comprise of special sensors to synchronize any actions, regardless of the user’s location. 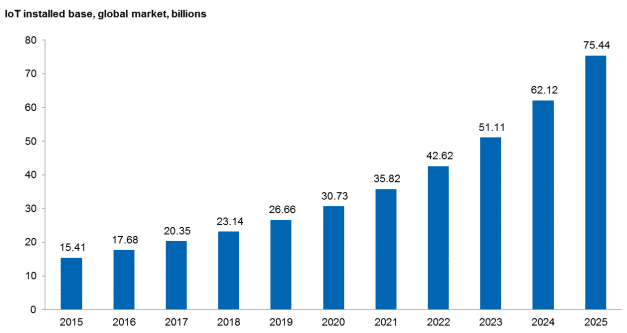 The entrepreneurial class across the world has already prepared its blockchain strategy. Why so? This is major because if this class misses out on a blockchain strategy at this point in time, they straightaway miss an opportunity to grow and expand. We live in an era where blockchain has reached its fifth generation. Over the decade, many blockchain experts and enthusiasts have argued and discussed the future of blockchain and its adoption into various sectors.

We already have a system in place and blindly introducing new technology within the system will expose that environment to potentially dangerous security breaches, hacks, and loss of data.

According to blockchain trends 2020, we are going to witness a rise in the Federated Blockchain. What does this mean? The mentioned term essentially is referred to as one of the best trends in the blockchain. Federated blockchain is majorly an upgraded version of the same technology making blockchain more useful for various use case scenarios.

Top blockchain trends also suggest that stablecoins will dominate the crypto space. We already know that cryptocurrencies are very volatile in nature. The year 2020 will witness stablecoins reaching an all-time high.

Inculcating blockchain technology in social media will genuinely address and solve numerous privacy breach violations, sandals, content relevance, and data control problems. Blockchain implementation in social networking will primarily ensure that all the published data on social media is untraceable and can not be copied. 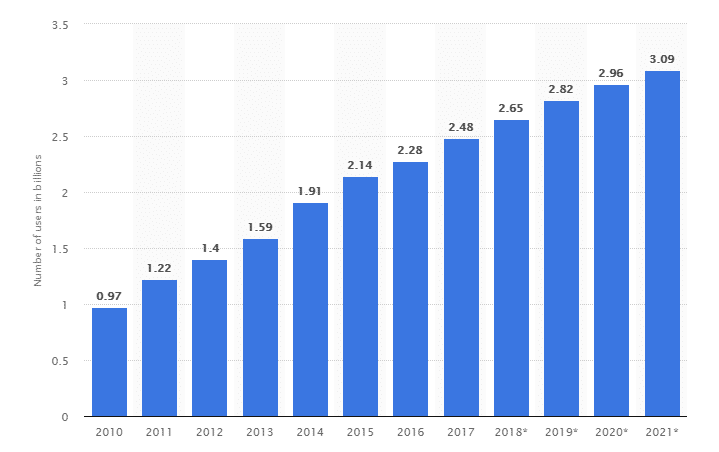 The implementation of blockchain in this space also makes sure that the users are able to maintain ownership of their data on social media.

An Era of Hybrid Blockchains 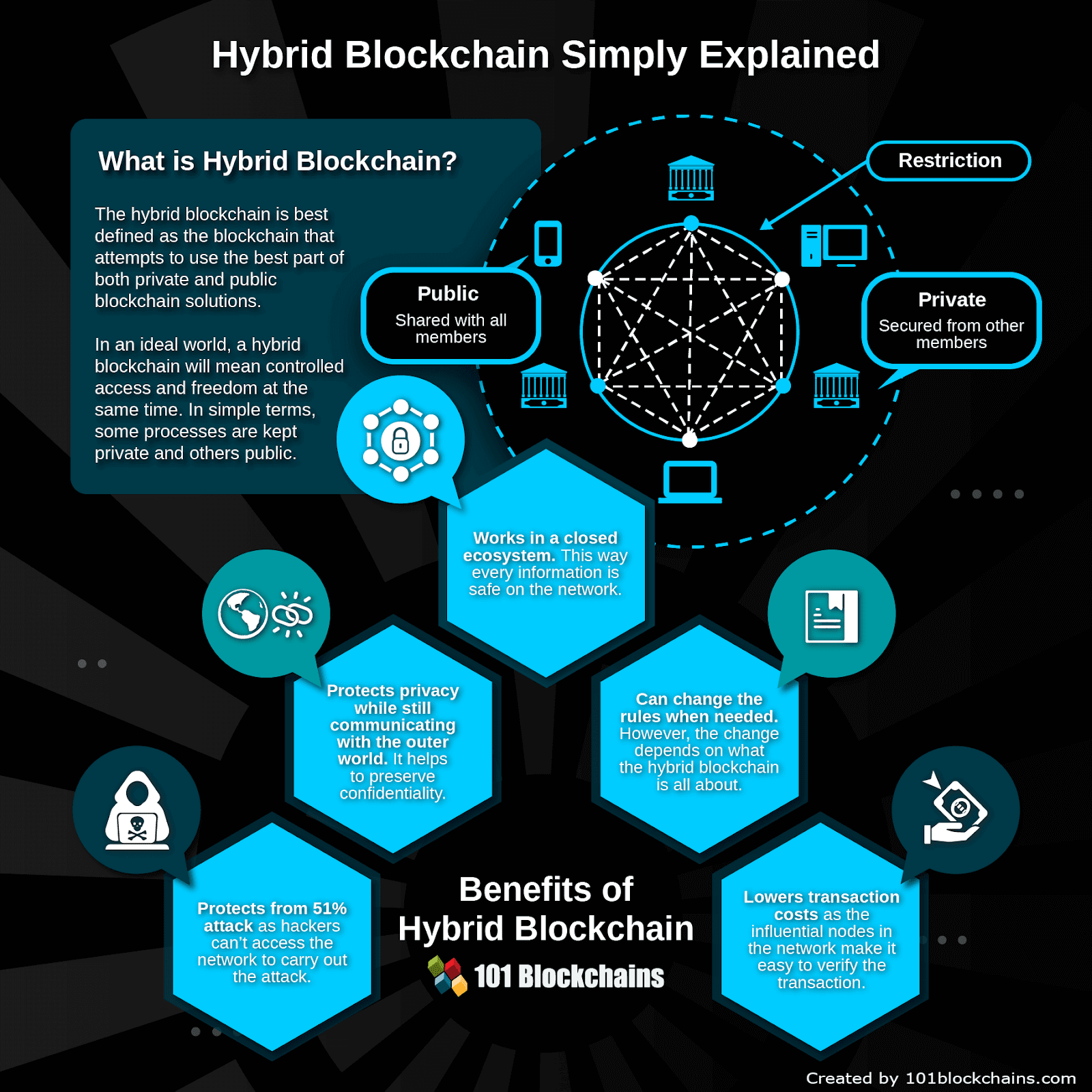 It is obvious that many startups in the field will fall but at the same time, blockchain enthusiasts and people, in general, will gain invaluable experience using this technology. Over time, blockchain will make its mark in multiple sectors forcing traditional businesses to adopt and adapt to blockchain technology.

Moreover, your involvement in the cryptoverse is your choice, but in an era where new and emerging technologies like blockchain are gradually being adopted in every industry, it is important that you understand blockchain and how this technology is being used to transform the world of business and investments across the globe.