Web app development on the React framework is getting popular day-after-day. Despite having come out very recently in 2013, it clearly didn’t take long to become one of the most loved libraries in the world. React is one of the most simplistic and flexible frameworks you can get your hands on, for building an interactive and dynamic user interface for Web and Mobile Applications, especially for developing single-page applications where data reflect in the real-time. Therefore, the demand for React development companies is on rising.

In this blog, I will discuss top react development companies in India and the rest of the world. This list has been finalized by considering the following parameters: 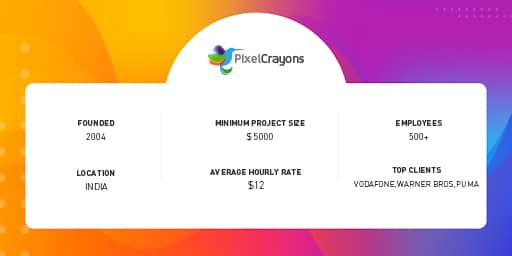 Founded in the year 2004, PixelCrayons has delivered over 500 successful react development projects for its clients spreading all across the world. Parvesh Aggarwal, the founder of the company, had a vision of providing premium software solutions with a perfect amalgamation of design, coding, and integration which really fuelled their vision and guess what, now they have made it to this list.

They offer services like Mobile App Development, Web App Development, Internet of Things, Virtual Reality and Augmented Reality, etc. They are really flexible with their operations so you can easily hire a dedicated development team for your react development project. At present, they have over 500+ employees, operating from its headoffice in India. It’s not only a React development company but also has a great pool of experienced React developers to offer. 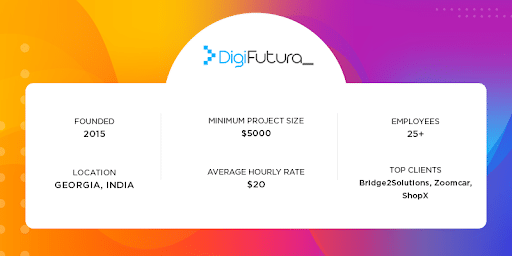 DigiFutura is based in Bangalore. It specializes in building MVPs for startups but their React developers are exceptional when it comes to building an app. They have been able to deliver exceptional and scalable apps with many technologies. React, React Native, Ruby on Rails, Node, Python, and Meteor are just to name a few. Apart from this, they tend to stand out with their IoT, AR, and VR App Development services. 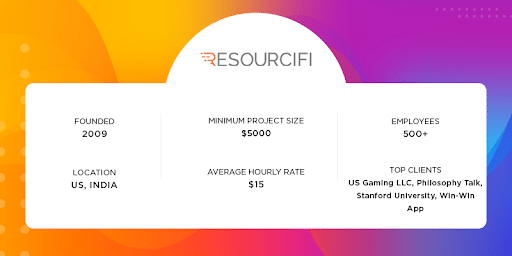 Resourcifi has come a long way since its inception. They completed thousands of projects over the years, because of which they earned hundreds of ongoing clients. Having successfully survived in a dynamic business environment for that long led to a boost in the number of happy clients and its popularity thereon. All of this has subsequently led them to expand their scale of operations.

Here at Resourcifi, just name it, and you will literally be able to find all kinds of developers there are and not just React developers. All you need to do is ask for the kind of service you need, which can be anything from Staff Augmentation, Web App Development, Software Testing to Digital Marketing, and within a blink, you’ll be on their client base. 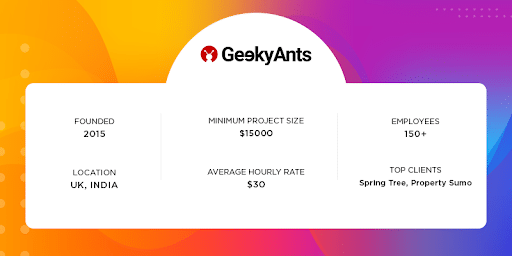 GeekyAnts is a Bangalore-based tech company founded in the year 2006, that specializes in web and mobile app development. They’re all about building exquisite software products and contributing happily to the developer community. They’ve contributed to NativeBase — a UI components library for React Native. They even have their own product called BuilderX, which is a design tool that can write React Native code for you!

GeekyAnts is known for using technologies like Node, React, React Native, Angular, Firebase, GraphQL for creating Web and Mobile applications. They are known to be experimental with new technologies which led them to adopt Google’s Flutter, Kotlin, and Vue. Lastly, GeekyAnts also sells premium content such as starter kits, full apps, UI themes, and animations on NativeBase Market. 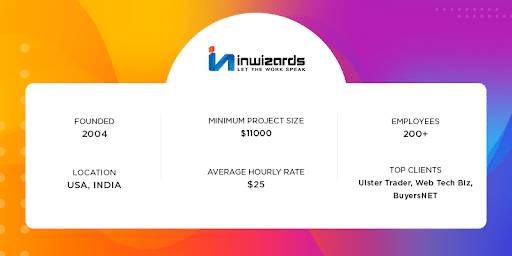 Founded in 2004, Inwards is another US-based company that has an employee base in India. It is known to be a performance-oriented, highly structured, and customer-centric organization. Inwizards works from a paradigm of sustainable development and thus, aims to bring about a change in the quality of services and business. They have unconventional ways around things and they cater to a unique niche of clients. 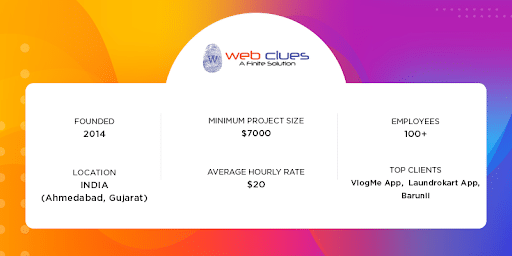 Webclues didn’t get enough time to prove itself as it was only founded recently in 2014, but it’s gradually pulling itself up to outrank others. WebClues Infotech has always endeavored to become an optimal solution to their clients’ needs by offering numerous services. Speaking of services, Webclues offers plenty of development services for Mobile Apps, Web Apps, Blockchain, UI & UX, etc.

Apart from React development services, Webclues Infotech even offers Marketing services like Brand Management, Creative Content, and SEO. It works more in terms of entire projects but can even provide you remote developers if need be. They are mainly known for Web and Mobile App Designing company that delivers desired solutions no matter what. 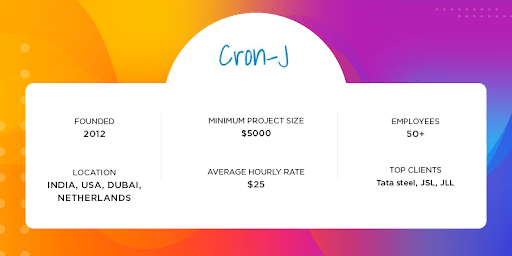 CronJ is initially a technology consulting firm with a proficient team working on providing video analytics, supply chain IT solutions and product development. What it’s not much known for, is that it’s also one of the best React development companies in India. CronJ’s developers are very competent and are well versed in the latest technologies so as to provide the best services as and when called upon.

They strive to combine the latest techniques with profound expertise in the industry and management to help clients obtain the best outcome in every aspect. They have a knack for partnering with developing or developed brands and help them build a profitable business. Apart from India, they have offices based in the USA, Netherlands, and Dubai. 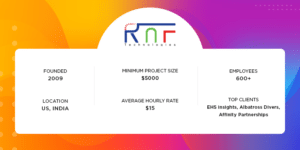 Despite having begun its operations in 2009, RNF Technologies built its way up to the top of this industry, at a pace that can only be termed phenomenal. When it comes to designing, developing, and delivering the services, RNF Technologies, by far, has the best reputation in the client base. The fact that they have employees coming in from tech giants like Google and AOL indicates a great deal of magnetism. 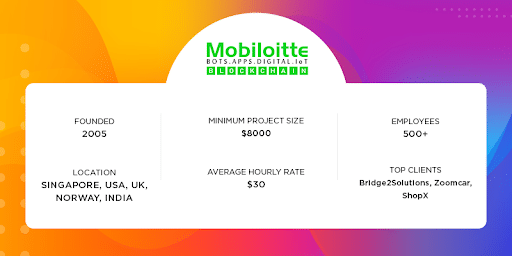 With a team of 500+ skilled workers, Mobiloitte is a Premier, Full-Service Software Development Company that specializes in services like Native & Cross-Platform Mobile App Development, Blockchain Development, Internet of Things (IoT) , Artificial Intelligence, Machine Learning, Big Data Analytics, Augmented Reality, Video Reality, and many others that you can check out on their website. That’s a lot more than asking for just React development companies.

Mobiloitte is very convenient when it comes to working with enterprises operating at any scale. Be it Start-Ups, Small & Medium Enterprises, Large Enterprises, Public-Private Partnerships & Governments. Having completed more than 5000 projects in the last 10 years speaks for itself. They are also known to be flexible when it comes to adopting new technologies for staying ahead of the curve. 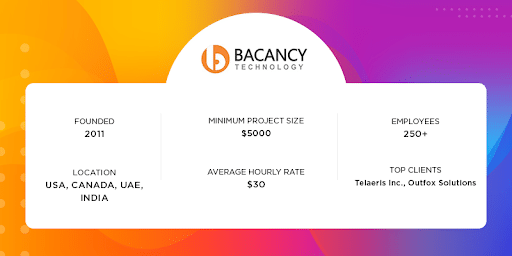 Bacancy’s story is quite interesting actually. Their first project was a webcam solution for one of their US-based clients, for whom they developed a webcam software solution to record videos and take pictures. They developed it as a security system to monitor the residence, office premises or a retail store. Bacancy preaches the philosophy of Agility in order to bring velocity to your business so that you’re able to respond to the changing needs of the digital economy.
They have a pool of over 250 skillful experts, enough for them to help your organization to propel further. They broadly categorize their services into Digital Transformation & Product Development, Enterprise Application Management, Agile QA, Automation and DevOps, and Digital Marketing. Even though they provide plenty of services, they have a proficient pool of ReactJS developers to offer excellent services.

Features of React That Make It Popular react development companies 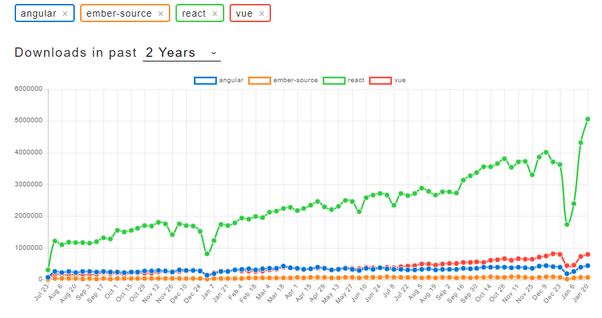 The above image shows how the number of downloads for React packages has grown over a span of 2 years, especially in January with the way it spiked. Well, it isn’t popular for nothing. There are many features that make it stand out from the crowd, which is exactly what we’re heading towards.

Let’s talk about the unique features of ReactJS:-

If you have been reading about ReactJS, you must have come across this term. JSX, which stands for JavaScript Extension, is an extension of ReactJS that allows you to write Javascript that looks like HTML. In HelloWorld, the Render() function that looks like HTML, is actually JSX. It’s a simple JavaScript that allows HTML quoting and uses these HTML tag syntaxes to render subcomponents.

2. Compilation Of Components
ReactJS is an assemblage of small units called components that are reusable. Small components are defined and are put together to form bigger components. Regardless of their size though, all the components are usable. No matter how small it is, a React component is still a plain-old JavaScript function.

3. One Way Flow of Data Binding
In ReactJS, the parent component passes on, a single set of immutable values, to a component renderer, as properties in its HTML tags. It also follows a process called “properties flow down; actions flow up”, which is a protocol that prohibits a component to directly modify any properties. It only allows a call back function with the help of which you can modify them.

4. Virtual DOM
Another prominent feature to be acknowledged is called Virtual Document Object Model, or Virtual DOM. React creates an in-memory data structure cache, enumerates the changes that are made, and then efficiently updates the browser. This provides the ability to write code as if the entire page is rendered on each change, whereas the React libraries only render the subcomponents that actually change.

5. State
During the course of the application, there are components that are likely to change and ReactJS recommends to store all of them in a single place. This place is called State in React Applications. Coding single page web applications couldn’t become any simpler as you’re easily able to locate the aspects of the web application that can change.

6. ES6 Class Components
Javascript didn’t have any class system for most of its existence, until June 2015, when they came up with “syntactic sugar” or “ES6”. Javascript classes were only brought into existence in order to make the syntax much more simpler and clearer, to create objects and deal with inheritance.

This list is not the universal truth, it’s just a conclusion drawn based on their customer satisfaction ratings, the portfolios, their web app development costs, third party websites, and obviously, their testimonials which you can go check out individually on each of the above websites.